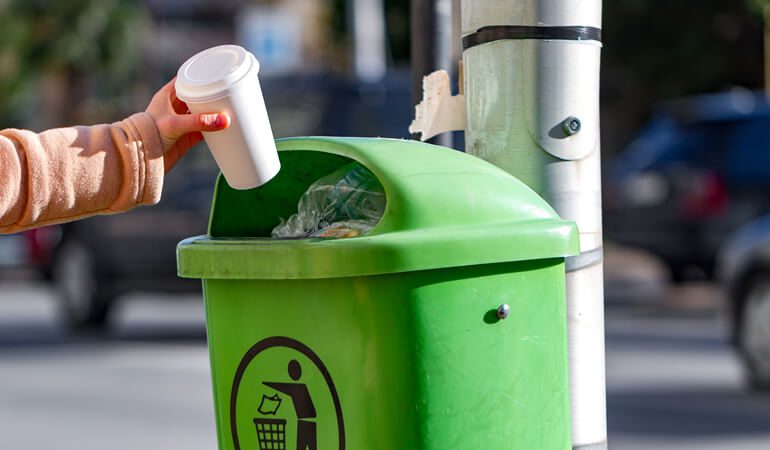 Recycling, one of the solutions to reduce discharges and tackle climate change, remains below 30% in countries such as Argentina, Japan, Colombia or even large generators of waste such as the United States, where barely 5% of waste is recovered. household waste.

In fact, the US is the largest contributor to land and marine pollution by plastic waste worldwide, with percentages of recycling of this material around 5% (two million tons), according to data from the Agency of Environmental Protection.

85% of the plastic waste generated in 2020 went to landfills (inside and outside the country), while 10% was incinerated.

The recycling figure for plastics contrasts with that for paper and cardboard, which amounts to 65.7% according to 2020 data from the US Forestry and Paper Association.

In New York City alone, last February, 46 tons of organic waste, 956.7 tons of metal, glass and plastic, and 1,010 tons of paper and cardboard were produced daily. The metropolis recycles around 18% of household waste and around 25% of company waste, according to data from the city’s Department of Sanitation published in 2018 and 2019, respectively.

For its part, for years, China was the world’s leading importer of waste as it is a vital center for waste processing, but since 2021 the Government has made the decision to recycle only its own garbage in an effort to implement its “circular economy”.

The value of all these renewed resources reached 900.38 billion yuan (132.623 million dollars), in an industry that has about 100,000 companies employing about 15 million workers.

Recycling by continents is as follows:

The European Union, where each citizen generates an average of 505 kilos of waste per year and 48% is recycled -according to Eurostat data from 2020-, tries to reduce the impact of its production and consumption with policies such as the Action Plan in Circular Economy included in the European Green Deal, which sets recycling targets of at least 55% by 2025.

In 2020, Brazil produced 82.5 million tons of garbage, of which only 4% is recycled between dry waste and 1% of organic waste, according to the Brazilian Association of Public Cleaning and Special Waste Companies (Abrelpe). .

In addition, from this entity they highlight that 40% of the waste in Brazil is discarded in one of the 2,700 irregular or open-air dumps that the country has.

In Argentina, waste recycling ranges between 7 and 8% of urban solid waste, according to estimates by Gustavo Fernandez Protomastro, a member of the Association for the Study of Solid Waste (ARS).

The country produces about 45,000 tons of municipal garbage daily, 1.15 kilos per inhabitant, according to the Ministry of the Environment, around 16.5 million tons each year.

Colombia, for its part, annually produces some 12 million tons of waste, of which only 16.5% is recycled, according to 2019 figures from the National Planning Department, and the goal of organizations in the sector is to expand it to 40%. by 2030.

Data from the Ministry of Environment and Sustainable Development indicate that among the most used discarded products are paper and cardboard (55%), followed by the family of metals (22.3%), and plastics (15%). .

Regarding Chile, the latest published data dates from 2019, when nearly 20 million tons of waste were generated, of which 96.9% was non-hazardous and 3.1% hazardous, according to the Ministry of the Environment.

In Ecuador, the estimated waste per capita for 2019 was approximately 0.86 kilos per day, with 5.2 million tons per year nationwide.

Meanwhile, Venezuela produces at least 20,000 tons of waste per day, of which less than 20% is recycled, according to unofficial estimates.

In Bolivia, it is estimated that the average Per Capita Production Index (PPC) for the nine capital cities and El Alto is 162,130 tons of waste per year, according to data from the Ministry of Environment and Water.

It also faces the challenge of managing technological waste, a section in which it is the third largest generator of electronic waste with a production that in 2019-2020 was 30% higher than the previous period and exceeded one million tons.

In Pakistan there is no effective mechanism to calculate the amount of waste it generates, but the official Environmental Protection Agency estimates that the country annually generates more than 20 million tons of solid waste, a figure that grew by 2 in the last year. 4% compared to the previous one.

Bangladesh, for its part, generates 977,000 tons of plastic waste per year, of which it only recycles 30%, according to a World Bank study.

5 guidelines to recycle and not fail in ...